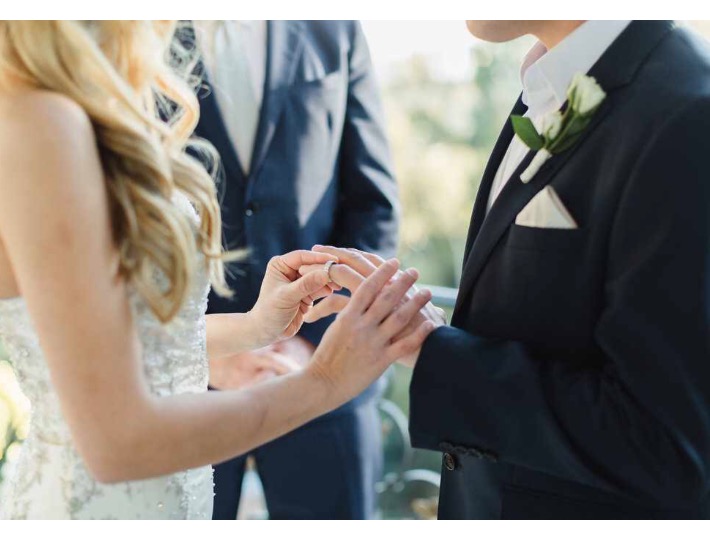 The couple were from out-of-state. They rented an Air B-n-B in Beverly Hills and hired a wonderful event planner to give them the elopement of their dreams.

Maria and Alex (names changed) were a fun couple who had a great Instagram-able look about them.

Their vows were pieced together from several different versions of the traditional wedding vow:

I promise to love you forever.

To be faithful and true to you.

To honor and comfort you.

To protect you and to always stand by you.

In good times and in bad.

In sickness and in health.

This is my solemn vow.

I pronounced them husband and wife. They gave a hug and I zoomed off, marriage license safely in the car.

My plan was to mail the license to the County clerk’s office on Monday.

Next day, Alex called asking if I had mailed the license. He sounded relieved when I told him I hadn’t. He asked that I not mail it back to the Clerk as he and Maria changed their minds and didn’t want to get married!

I invited them to come over to my place and for more than two hours we talked – and talked. And the story they shared, tears streaming down each of their faces, was one of the most unusual tales any couple has ever told me. And one of the most poignant.

What happened you wonder?

Backstory: Alex lives with a severe kidney ailment and eventually will need a transplant. Maria threw herself into learning everything about the ailment and then devised a healthy meal regimen for Alex. Part of that plan required he not eat protein.

On their wedding night, Maria found a receipt from McDonald’s in Alex’s jacket.

For almost two years he’d been eating protein and dairy behind Maria’s back. He lied to her all that time as she grew more confused as to why his diet was not helping him when doctors claimed it should.

Maria wanted the marriage annulled on the grounds that Alex is selfish, has a death wish, is living a fantasy, and is a liar.

And yet it was clear to me that they did love each other.

I had them review their vows, line-by-line. I asked each what they thought the vows contractually meant.

How do you “honor” a loved one?

Over the years, I’ve had couples tell me that they were divorcing because of debt, infidelity, religion, kids (wanting/not wanting) – BUT – protein? That was a new one for me!

I asked Alex how he would feel if Maria had had a secret. He looked sadly at me and said, “maybe she does!”

I shared with them a quote from a theologian I much admire – Frederick Buechner:

I not only have my secrets, I am my secrets.  And you are your secrets.

Our secrets are human secrets, and our trusting each other enough to share them

with each other has much to do with the secret of what it is to be human.

And then there’s that quote from Zora Neale Hurston:

Love makes your soul crawl out from its hiding place.

It was clear to me that FINALLY – after gifting each other with vows and sealing those vows with an exchange of rings, Alex and Maria were able to crawl out from their hiding places and look into each other’s faces and see what had been there all along – fear, longing, desire, love, and more fear.

I handed them their license and told them to go on their planned road-trip honeymoon up the PCH coast and talk. I urged them to spend seven days talking like they’ve never talked before. Then they could decide if they wanted to be married to each other.

I told them that if they wanted to be married they should find a spot and “renew” their vows. If they didn’t think trust could withstand deception then they should throw away the license and we’ll all get on with living. . .

Seven days later they called and told me they mailed their license to the County Clerk.

And once again I bowed before the mystery of life and love. . .