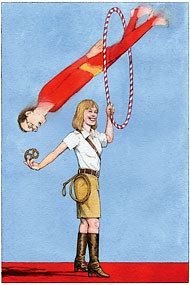 It is a curious thought, but it is only when you see people looking ridiculous

that you realize just how much you love them.

And that blank is filled in with a wildly imaginative assortment of ideas.

Thumb through contemporary wedding planning books and you’ll notice that tradition is adapting to many modem inclinations.

I officiated a wedding where the bride had a “man-of-honor” and the groom had a “best woman.”

Another bride, whose father was deceased, had her mother escort her down the aisle.

A shy groom, who was a musician, wrote a song for his bride and sang it in place of “saying” his own vows.

These are visuals that broke with tradition and yet added immeasurable warmth and texture to their ceremonies.

I really haven’t seen it all, but I’ve seen enough to know that the “different” (or even whacky) sometimes can add to the sweetness of the day.

A few memories that still make me smile –

The bride who walked down the aisle to the blaring of The Star Wars theme. Yes, it did have an other-worldly feel to it.

The bride who did somersaults down the aisle (she was in her 40’s). More than feeling stunned, I was amazed that she could do them while wearing a dress.

The bride who planned her wedding, guided by her astrological chart. She determined that the vows had to be said beginning exactly at 5:59 PM. I had a friend stand off to the coner and flag me when it was time.

And then there was the couple who had their wedding in the backyard of their new home. As a symbol of their pledge to wholeheartedly “take the plunge” they jumped into the pool after I pronounced them married.

A wedding celebrates you in all your glory and uniqueness.

The only thing you “have” to do is say your vows – though I have had nervous couples ask me if they actually had to say their vows!

And speaking of vows ~

When creating a wedding ceremony one of the main issues I discuss with a couple is the vows. Most couples are most nervous about this element.

Couples often tell me that they don’t like standing in front of people who are looking at them.

Hmm – that’s going to be a hard one to get around at a wedding with any guests!

Many couples opt to repeat their vows after me. I say the vows in a low voice, so as not to be heard by the guests, and then hope that the couple will say them in a louder voice-which isn’t always the case.

Some couples, though, want to write their own personal vows. Many of these couples are afraid that they’ll sound “cheesy.” I can honestly say that I’ve never heard vows that I thought were “cheesy.” Granted, some were more eloquently worded than others, yet all were poignant.

How great it is that you have someone in your life who compels you to search deep in your heart for words that express the passion of your commitment!

The committed heart is not able to offer cheesy sentiments.

How to Write Your Vows: Giving Voice to What Is Deep Within